The Reykjavík International Film Festival – RIFF for short – will start on September 27th. It’s the fifteenth edition and amongst the guests is one of Scandinavia’s biggest actor and a young Hollywood star.

When you walk around Kastrup airport in Copenhagen you are met with a giant poster of Mads Mikkelsen, gulping down a pint of Carlsberg. The biggest actor in Scandinavia and the most famous beer in the same photograph. Let’s just say one of them deserves their fame. Because even if Mads has questionable taste in beer (or got ridiculously well paid for the photo shoot) he has good taste in film roles – at least when the films are European.

His star shone the brightest at the start of the decade, when two films he played the lead in were nominated for the Best Foreign Film Oscars in two consecutive years – and for the latter he won the Best Actor prize at Cannes. At that point I seriously pondered if Mikkelsen might just be about to become the best actor of our era.

The earlier of the two was A Royal Affair (En kongelige affære), where he plays Struense, a German doctor in the service of the king of Denmark. He’s a bit more preoccupied with his affair with the queen though. Both of them are people of the enlightenment, even if the Denmark they inhibit is still stuck in the Middle ages. Despite that love triangle he eventually becomes the king’s ally, since the king has neither the ability nor the will to rule the country, making Struense a de facto king and pushing for some reforms.

This paints a very convincing portrait of the era, Denmark in the 18th Century, and the film also shows both the flaws and the humanity of all three leading characters. It also avoid most of the pitfalls of that otherwise terrible sub-genre of the Royalty biopic like The Queen and The King’s Speech, possibly the worst of all sub-genres, hated by everybody who really value democracy.

It’s also worth noting that a little known Swedish actress, Alicia Vikander, played the queen – just before shooting to fame, winning an Oscar and becoming probably the famous actress in Scandinavia. 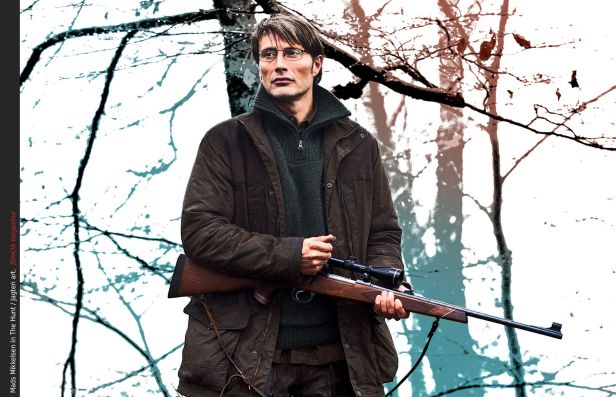 The latter film was The Hunt (Jagten), which is simply one of the most shattering film of recent years and the peak of Mikkelsen’s career so far. He plays a kindergarten teacher that is wrongly accused of molesting one of the kids in his care – and therefore becomes a total castoff in his small town. The film paints a vivid picture of how grave the consequences mistakes in the handling of such cases can be and also shows how poisonous small-town culture can be at its worst. The film is directed by Thomas Vinterberg and is really a companion piece to his earlier masterwork, The Celebration (Festen), which was about a man guilty of the crimes Mikkelsen’s character is accused of – albeit something that isn’t found out until decades later, during his very last years. Those films are therefore two odd sides of the same coin – yet what sticks in the memory is Mikkelsen’s masterful performance, which shows us how even the strongest of us can break if our world is shattered.

Yet it’s like Hollywood hasn’t quite figured out what to do with him. He was a very useful Bond-villain in Casino Royale, but for some reason the screenwriters of otherwise fine blockbuster films like Doctor Strange and Star Wars: Rogue One decided to give Mikkelsen all the worst lines.

Yet he’s proven his ability to act just as well in English – like he did in Danish Western The Salvation. It may not be the most original western in the world, its theme of revenge is nothing new – yet it does start of in an original fashion, showing Mikkelsen’s Danish family who (apart from him) have just arrived in this wild land. Because it often seems forgotten in those westerns that these people were settlers from all over Europe and beyond, English was far from being the dominant language it would later become. Yet even if the rest isn’t equally original Mikkelsen is in his element as a movie star who can keep the audience captivated by star power alone. He’s also gained praise after filling the shoes of Hannibal Lecter in the TV series Hannibal and next up is Chaos Walking, considered by many to be one of the best fantasy books of recent years – and here’s hoping the film will match that.

A Starlet in search for the right role

Mikkelsen is getting an award at RIFF and also among the guests is actress Shailene Woodley, who will be in a jury as well as holding a masterclass.

Woodley is one of Hollywood’s most promising actresses – but Mikkelsen can probably give her some advice about choosing the right roles. Woodley’s star rose quickly – but her first two proper film roles are still her best. She was sensational as George Clooney’s teenage daughter in The Descendants (the best acting underwater in a swimming pool ever) and even better in one of the best and most underrated teen films of the decade, The Spectacular Now. She’s much more famous for the teen flick that followed it, The Fault in Our Stars, which isn’t bad but nowhere near as good and a bit too corny at times.

At that point the talk of the town was that the new Jennifer Lawrence had been found, her successor as the most promising actress in Hollywood, and in fact it was well earned – even if a bit odd since she’s only a year younger. But after some fine roles in small films at the start of her film career Lawrence became a superstar in the dystopian teen series The Hunger Games, that despite some flaws were on the whole a pretty solid teen-dystopias. Woodley seemed set for exactly the same path when she was cast in dystopian teen series Divergent – yet sadly that film felt like a poor imitation of The Hunger Games – and despite hardly anybody liking the first film, she was contractually stuck with the two sequels.

Baltasar Kormákur’s Adrift. The talent is certainly still there – she just needs the right roles.

There are other guests, like the Lithuanian experimental filmmaker Jonas Mekas and the schedule for the festival can be found on riff.is.