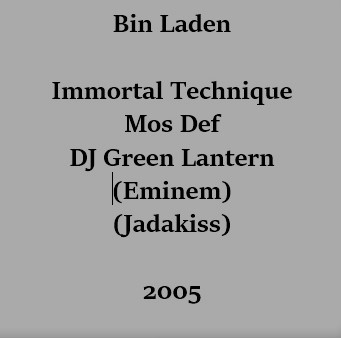 It was seventeen years ago last Tuesday. Since the towers fell. And as many suspected, that would prove only the beginning, the cataclysm for events that we don’t see the end of. The major effect has obviously been felt in the Middle East, where Americans have been busy sending in troops with often terrible long-term consequences. But also back home, where you can trace the rise of nationalism and more racial tensions to that fateful September day at the start of the century.

In 2004 many people had already started making that connection – and those include the rappers Immortal Technique, Mos Def and DJ Green Lantern, in addition to samples from Jadakiss and Eminem. They sang about how it wasn’t Bin Laden laying their neighborhoods to waste, that was Bush himself.

The song was certainly controversial – particularly among literary fundamentalist, who took everything literally, including the lines about Bush himself knocking down the towers.

The main lyricist, Immortal Technique, has gone on record saying he didn’t feel Bush was responsible for 9/11, but adding that he hadn’t been quite honest about his links to some of those responsible and that is was also quite absurd that while all but two of the actual terrorists were Saudi Arabians, yet Afghanistan and Iraq ended up being attacked.

In fact it’s Mos Def and Eminem who are responsible for the less factually accurate lyrics, while most of the lyrics are sung by Immortal Technique – and that part is much more fact based, pointing out the connection between the CIA and bin Laden among other things, while also mentioning Fake Christians and Fake Politicians, presciently rhyming with the Fake News of our day.

Mostly though this is an angry song, a song of fire and brimstone, where all the anger of how America is evolving, the anger over the backlash in the civil rights struggle of African Americans and the anger over how the division is only growing – all this anger turns into a call for arms, where it’s pointed out that the enemy is not the faraway Muslims of the Middle East, but rather their very own leaders, something that might well lead to a civil war eventually if left unchecked, hence the following lyrics:

‘Cause if another country invaded the hood tonight

It’d be warfare through Harlem and Washington Heights

I wouldn’t fight for racist churches from the South, my nigga

I’d be fightin’ to keep the occupation out, my nigga